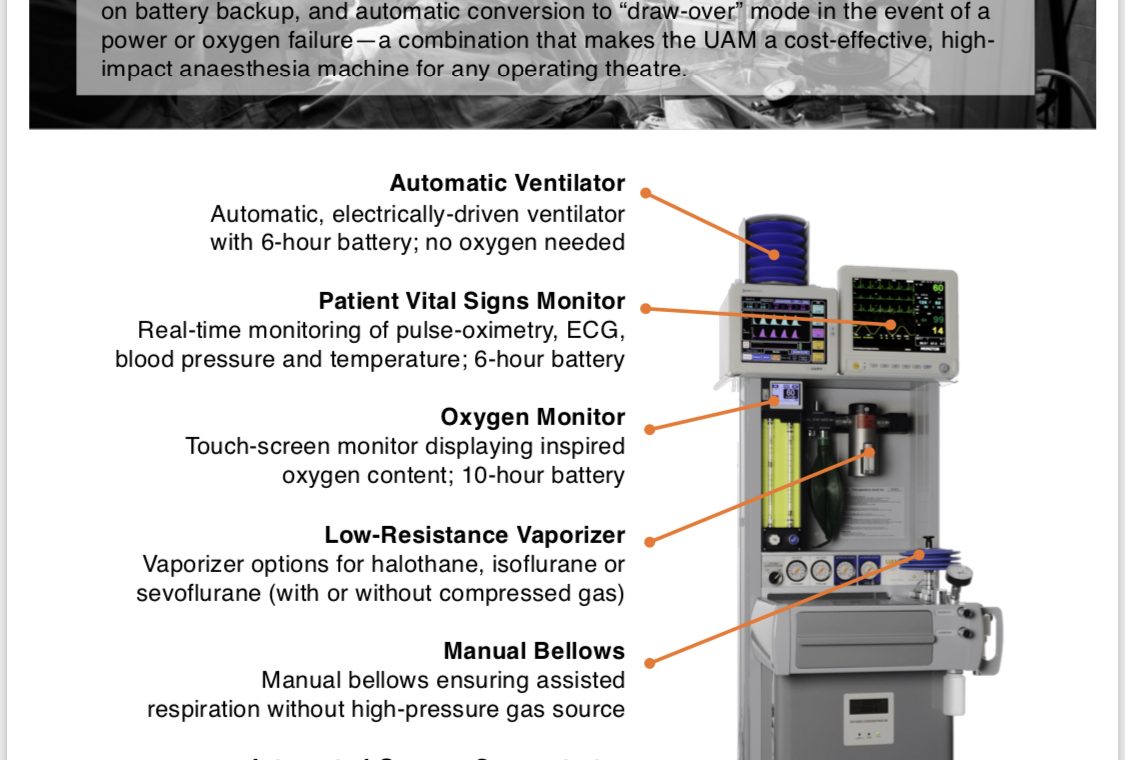 Safe surgery is a major challenge in many parts of the world. An important component of safe surgery is safe anesthesia. Unfortunately a significant proportion of the world’s population does not have access to safe surgery. According to the World Health Organization, five billion people do not have access to safe, timely and affordable surgical care and anesthesia worldwide. In low and middle income countries, that is nine out of ten people.

In addition, poor after sales support for anesthesia equipment adversely affects the delivery of safe anesthesia. Most medical equipment sold in LMICS come with an average of one to two years’ warranty. After the warranty period, the facilities struggle to maintain the equipment because the parts are expensive and unavailable locally. In addition trained technicians have to be imported at great cost to carry out repairs. A lot of the equipment end up being packed away.

The Universal Anesthesia Machine is the only anesthesia machine certified to operate without electricity or medical oxygen. The UAM has a built – in oxygen concentrator which is able to generate oxygen from room air. The situation whereby operating rooms run out of oxygen in the middle of a case or have to cancel an important surgery has become a thing of the past.

The UAM also has a built-in standby battery which can power the machine for up to six hours should the electricity go off, which is quite common in many countries. It is said that about eighty percent of all hospitals in Sub-Saharan Africa do not have reliable electricity, and this creates a dangerous situation for surgical patients in particular.

The ventilator for the UAM is electrically driven, and does not require a high pressure oxygen source to function.

The UAM was developed by Dr Paul Fenton, a British anesthesiologist. It was tested at simulation labs at Johns Hopkins. It is manufactured at an ISO – certified manufacturing plant in the UNITED KINGDOM, and has been cleared by the US FDA. It also has European Union CE CERTIFICATION.

The UAM is currently in active use in dozens of countries. In Tanzania for example, the government has selected the UAM as its anesthesia machine of choice in an ongoing upgrade of its public hospitals. So far about 150 UAMs have been installed. The second phase of the contract will bring the number to about four hundred UAMs.

The UAM is built with parts that are easy to come by, and does not require specialized tools to maintain or repair. A trained technician with a wrench and an Allen key can carry out repair and maintenance on the UAM anywhere in the world.

The UAM comes backed by a three year comprehensive warranty, parts inclusive. The purchase of the UAM comes with training for both clinical users and technicians at the purchasing hospital.

HeiDoctor are authorized distributors for the UAM in Ghana.